Are Proponents of Climate Risk Insane?

Albert Einstein reportedly said that “insanity is doing the same thing over and over again and expecting different results.” We’re probably all guilty of that from time to time . . . guided, as we are, by another famous saying: “hope springs eternal.” 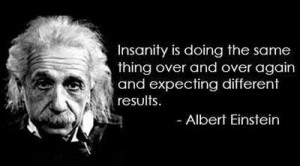 Einstein’s thinking came to mind as I read the newly released report from CNA and its Military Advisory Board entitled National Security and the Accelerating Impacts of Climate Change. The report says the right things about risk and how climate change is likely to aggravate national security concerns, potentially with disastrous consequences. As the report notes:

“The projected impacts of climate change—heat waves, intense rainfall, floods and droughts, rising sea levels, more acidic oceans, and melting glaciers and arctic sea ice—not only affect local communities but also, in the aggregate, challenge key elements of our National Power. . . . The projected impacts of climate change will strain our military forces in the coming decades. More forces will be called on to respond in the wake of extreme weather events at home and abroad, limiting their ability to respond to other contingencies. Projected climate change will make training more difficult, while at the same time, putting at greater risk critical military logistics, transportation systems, and infrastructure, both on and off base.” 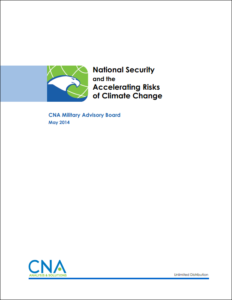 But three things struck me about the report:

1. It’s pretty much a repeat of CNA’s 2007 report National Security and the Threat of Climate Change. With the exception of noting that some manifestations of climate change seem to have accelerated since the 2007 report, I don’t see much that is fundamentally new in the 2014 report.

2. The relative alarm CNA expresses in the report seems out of sync with the Department of Defense’s 2014 Quadrennial Defense Review (QDR), also recently released. The QDR mentions climate change in just a couple of places. One paragraph is strongly worded:

“As greenhouse gas emissions increase, sea levels are rising, average global temperatures are increasing, and severe weather patterns are accelerating. These changes, coupled with other global dynamics, including growing, urbanizing, more affluent populations, and substantial economic growth in India, China, Brazil, and other nations, will devastate homes, land, and infrastructure. Climate change may exacerbate water scarcity and lead to sharp increases in food costs. . . . These effects are threat multipliers that will aggravate stressors abroad such as poverty, environmental degradation, political instability, and social tensions – conditions that can enable terrorist activity and other forms of violence.”

But that paragraph gets largely lost in the larger document, and the QDR’s other reference to climate change is more ambiguous: 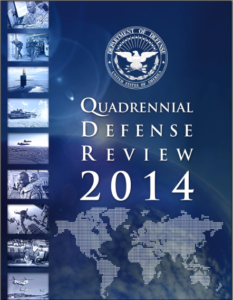 “Finally, the Department will employ creative ways to address the impact of climate change, which will continue to affect the operating environment and the roles and missions that U.S. Armed Forces undertake. The Department will remain ready to operate in a changing environment amid the challenges of climate change and environmental damage. We have increased our preparedness for the consequences of environmental damage and continue to seek to mitigate these risks while taking advantage of opportunities.”


The takeaway message across the QDR’s 88 pages has little to do with climate change. Given the politics of climate change in Washington, this may be predictable. But it doesn’t do much to catalyze the action the CNA is looking for.


3. Most importantly, however, the CNA’s new report is just one in a long list of reports focusing on the interplay of climate change and national security issues. Shown below is a partial list of relevant documents in our Climate Watson knowledge management system pertaining to climate and security: 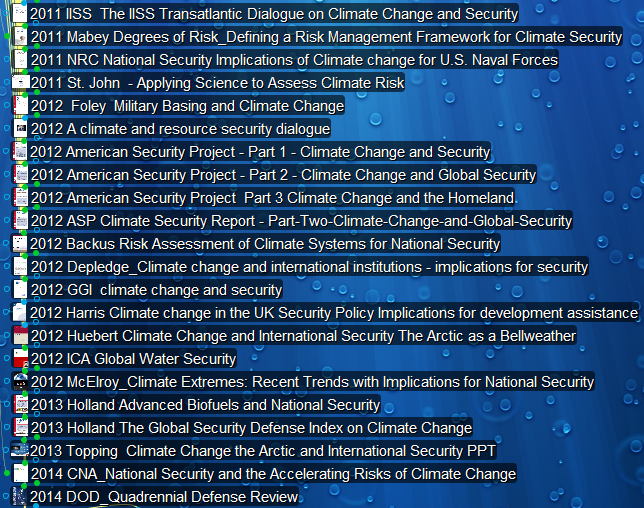 When the CNA report appeared, the Twittersphere greeted it as if it were the first report to link national security and climate change. It’s not — there have been dozens of such reports going back a decade or more.

I’m not taking issue with what’s in the new report. I am questioning the fact that similar reports appear again and again, presumably with the hope that they will eventually have a significant impact. While that is possible, I would argue we should be thinking more seriously about why the reports have not had the impact their authors would have liked. Moreover, we should address what can be done differently with future work in the field. Are there more effective ways, for example, to communicate climate risk from a national security standpoint?

Interestingly, not everyone takes for granted the assumptions underlying many of the reports. In 2007, Mike Hulme, professor of climate and culture at King’s College in London, argued with the notion of Climate Security: the New Determinism. These ideas were picked up more recently by Keith Kloor, a freelance environmental writer, in blog posts such as A Controversial Claim: Climate Change = War + Violence, and The March of Climate Determinism. These blogs challenge our ability to draw an unequivocal cause and effect relationship between climate change and future security problems. Sandia National Lab made an analogous point in 2012 in Risk Assessment of Climate Systems for National Security:

“Risk is often dominated by low probability, high consequence events. . . . Current climate science has not developed formal Uncertainty Quantification methods to substantiate the improvement in the quantification of uncertainty or the quality of analysis. Existing hydrological models cannot assess the physical consequences of extreme changes over existing conditions. Current socioeconomic models cannot address the pan-national migration of populations and commerce due to physical changes in the environment. Existing (climate change) Integrated Assessment Models (IAM) are not compatible with risk assessment methods. . . Only now are national security organizations (DOD, DHS, Intelligence Community) realizing the issues – but do not yet how to address them. The climate science community is only now experiencing pressure to make the understanding of uncertainty a priority.”

Certainly, quite a bit of work remains to be done. Perhaps some of this work could help communicate the climate and security message more effectively. Perhaps the national security community should look beyond its disciplinary borders, to excellent work like that of Jonathan Rowson in his 2013 A New Agenda on Climate Change. It has to be a higher probability play than just repeating the same message over and over again, hoping for a different outcome.