Climate Change and Sustainability: A Widening or Narrowing Gap?

Observers and students of climate change risk, on the one hand, and sustainability advocates, on the other, have been on seemingly diverging paths for the last decade. This may seem contradictory: aren’t these issues so closely related that their paths should overlap dramatically and at least run in the same direction?

In the climate arena, we often talk about climate issues in terms of “climate risk,” as a subtopic of the field of risk management. This subtopic looks at the risks to our society and the planet generally of not doing anything (or not doing enough) about anticipated or potentially more severe changes in global climate. But people are tired of talking about climate risk. It’s an enormous topic, for one thing, and we’re making so little obvious progress, for another. Conversely, sustainability efforts tend to focus on concrete actions that are measurable and achievable:

As a result, focusing on ‘sustainability’ rather than on ‘climate risk’ offers psychological advantages:

Both of these are harder to do with climate risk, where the more appropriate mantra is probably “think locally, act globally.” With atmospheric concentrations of CO2 rising beyond 400 ppm, with 2014 officially labeled the warmest year on record, and with many records including Arctic ice melt being smashed regularly, we’re pretty clearly not managing climate risk. As the conventional wisdom builds that we should expect 4-5oC of global temperature change by 2100 (rather than the 2oC on which the media continues to focus), it should become more difficult to focus on intent and incremental steps.

Changing How We Look at “Climate Change” and “Sustainability”

Perhaps one way to look at the differences between these two terms is to think about the issue of “incremental” vs. “transformational” change. The only way to dramatically slow climate change will be through transformational societal change that requires policy leadership, if only to accelerate technology development and deployment. There are plenty of eligible technologies, from self-driving automobiles to zero-energy buildings. While sustainability has historically been measured primarily in incremental terms, there has been some change recently in how business leaders are talking about sustainability:

“Business leaders believe that only with greater government intervention—at global, national and local levels—can sustainability move from sporadic incremental advances to a collective and transformative impact. . . . The transition toward companies promoting sustainability through the business case promised a new era of market solutions to global challenges, but in the face of limited progress business leaders are beginning to express doubts over the potential for greater scale and speed without active government intervention.”

What the Global Compact CEOs are realizing, much as climate change activists before them, is that they can’t really influence global climate and sustainability outcomes on their own. No matter how much they might try at an individual company level, and how much money they save from efficiency measures, it’s not going to change the endgame when it comes to global trends. It’s incremental, which is nice as far as it goes. But it’s not going very far in the larger scheme of things.

The “sustainability frame” that dominates today needs to recognize this. When salmon swim upstream they might celebrate (if they could celebrate) overcoming the individual waterfall or avoiding the lurking hungry bear. But the only thing that really matters at the end of the day is getting back to their spawning grounds. The endgame is everything. As humans, it’s perfectly OK to focus efforts on incremental changes that are within our control and to pat ourselves on the back for successfully achieving those incremental changes. In fact, such celebrations are probably critical to staying motivated in a difficult endgame like climate change mitigation. But if we don’t figure out ways to always keep the endgame in mind, we risk getting complacent and distracted — and never getting there.

In the 1958 film White Wilderness, Walt Disney films brought us the metaphor of herds of lemmings periodically throwing themselves off cliffs into the sea. The filming was staged (lemmings don’t actually throw themselves off cliffs in large numbers), but the lemmings image has become iconic. Moreover, it’s too good to pass up when it comes to putting climate risk and sustainability into context.

So imagine cliffs in the distance as a metaphor for the amount of climate change the scientific community is telling us to expect, with the resulting impacts of 4-5oC of average global temperature by 2100, and several additional degrees the following century — almost inconceivable in a world where human civilizations have evolved within a remarkably stable 1oC band over the last 10,000 years. Human society seems inexorably headed up the slope toward these climate risk cliffs, just as Walt Disney’s fictional lemmings did. 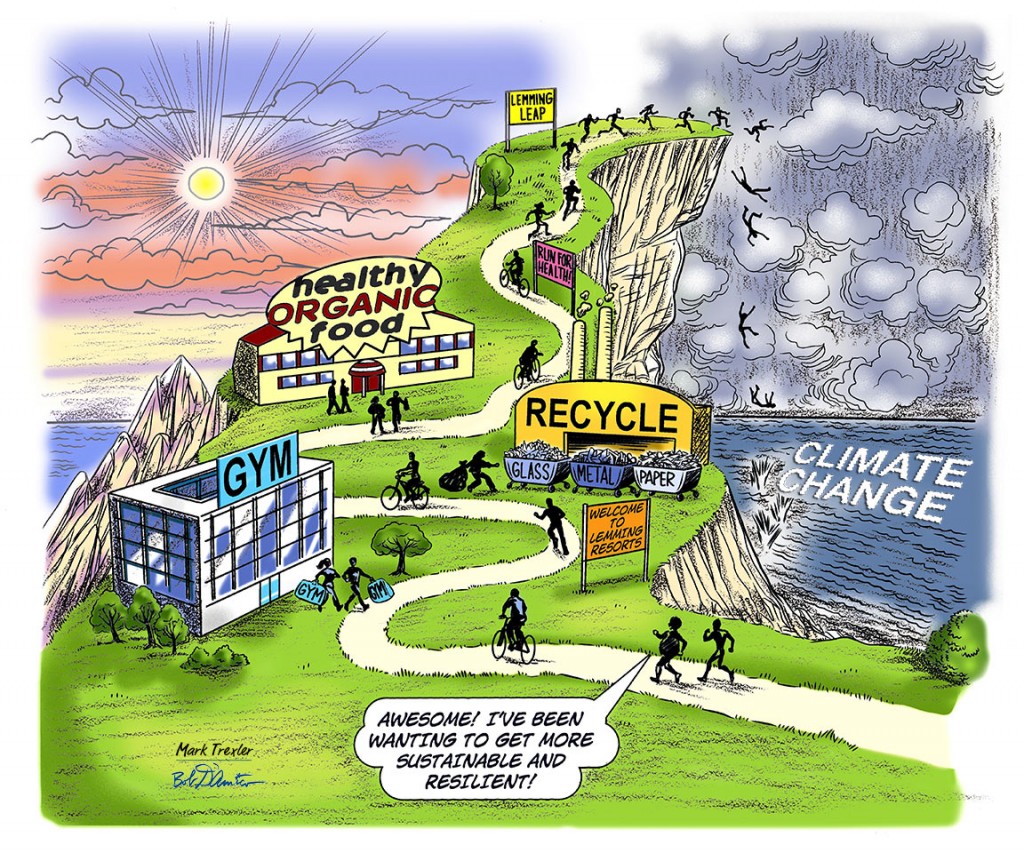 If we focus only on the short-term sustainability goals, instead of always making sure to keep an eye on the climate risk cliffs in the distance, where does that take us? Perhaps it encourages us to focus on our efforts to promote energy efficiency and water savings, “eat locally” as a more sustainable alternative, watch our personal carbon footprints, and engage in recycling at home.  It is certainly important to set achievable targets when trying to accomplish change and to feel a sense of reward for positive steps taken. But if we lose sight of the climate risk cliffs in the fog of incremental action, it could all prove ephemeral when we inevitably reach the cliffs. Somewhere along the way, we need to move to the transformational side of the equation.