Are We Giving Up on Salmon?

We had an exchange student from Germany this year in our home. He joined the ski team, looking forward to the thrill of skiing and competing with his American classmates. In retrospect, it was a poor choice: very little snow, poor conditions, and cancelled runs.

The overall prognosis for snow sports in the Pacific Northwest is not good. There’s lots of natural variability in the climate system, and we’re likely to see some snowy winters, but the long-term trend is simple: as we warm the climate, we’ll see less snow. I told our exchange student to look on the bright side – he’ll probably be able to tell his children he was on one of the last ski teams!

Now Oregon’s summer headlines are about dying salmon in local rivers and streams, and most recently restrictions on fishing to try and give stressed fish a break. The lack of snow pack and the statewide drought are lowering water levels, and compounded by repeated heat waves are generating record water temperatures and growing numbers of dead salmon. New reports this week suggest that up to 50% of some salmon runs will not make it due to water temperature 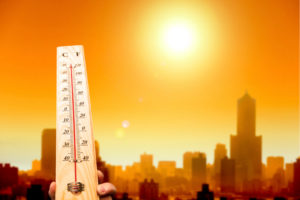 The Oregonian’s original story a few weeks ago on the fish deaths avoided the topic of the changing climate. Of course, we can’t conclusively attribute the lousy ski season and the salmon deaths to the changing climate. A 1 in a 1,000 combination of random events having nothing to do with climate change could explain this year’s extremes. But if factoring in climate change trends changes the odds to 1 in a 100 or even less, which is the better bet?

As with skiing, the trend for salmon is easy to predict. As we warm the climate, we’ll see fewer cold-water fish. We’ll likely have good salmon years given the natural variability in the system, but over time our historic salmon runs and snow packs are “dead men walking.” They won’t be alone, as species and entire ecosystems are hammered by higher temperatures, more droughts, more wildfires, and warming and acidifying oceans.

As a global society we’ve collectively chosen to largely ignore 30 years of climate scientists’ warnings in the cars and products we buy, the energy we consume, and the decision-makers we elect. And now salmon, a linchpin in our own region’s cultural heritage, are serving as one of many “canaries in the coal mine.”

Oregonians didn’t decide to dispense with snow sports and cold-water fisheries, any more than Tibetans have decided to dispense with the Himalayan glaciers that supply their drinking water. That’s where the Oregonian got it so wrong by announcing late last year that global climate change would no longer be an editorial priority. While it’s true that Oregonians can’t avert climate change by themselves, decisions we make in Oregon do influence the fate of Tibetan glaciers, just as decisions made elsewhere influence the fate of our salmon and our snow pack. In the context of the ultimate collective action problem that climate change is, focusing only on “Oregon’s climate” suggests we’re giving up on salmon, on snow, and other aspects of what makes the Pacific Northwest so unique. Is that really the choice we want to make for the future?