The Climate Chessboard at the Beginning of 2016 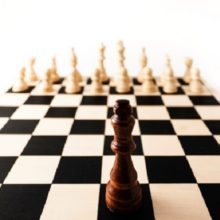 Reposted from original publication at Greenbiz.com, 12/8/2015, before the conclusion of COP-21 in Paris. We welcome your feedback on what you see are the key “chess pieces” of 2016.

How can we evaluate whether we’re making progress on climate change, how much, and why? One frame for thinking about climate change progress is that of a million-piece jigsaw puzzle, as Neil Matterson of the Brisbane, Australia, Sunday Mail did in this 2008 cartoon. It’s a useful frame — but we think the concept of Climate Chess is even better. 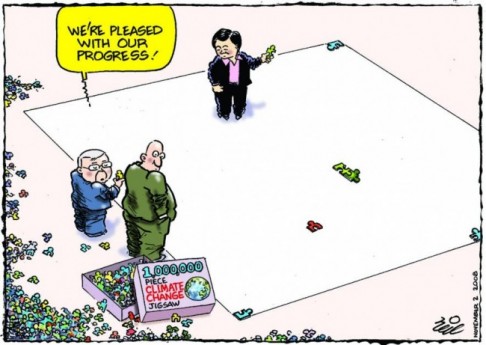 Climate Chess differs from ordinary chess. It isn’t played on a conventional chessboard. It also differs in that there are many players, and the two sides do not have the same number and kinds of chess pieces. But the chess frame aptly characterizes the complicated and strategic challenges of climate change. It also integrates easily into scenario planning on climate risks and opportunities, which more companies should be doing.

Players can play both sides simultaneously, intentionally or not, thus adding a significant wrinkle. A company striving to reduce its carbon footprint while also funding a trade association that opposes climate policy is playing both sides. So is an individual who supports climate policy action while opposing a gas tax. Welcome to Climate Chess!

The Climate Web is a knowledge tool we are developing to help make the best thinking and work on climate change available to anyone; through it we track more than 100 Climate Chess pieces. Here, I take a look at 11 key pieces to see how they fared in 2015, and what 2016 might hold.

(In the discussion below, the primary chess piece heading links take you to the Climate Web. The other links take you directly to the highlighted story.)

Chess pieces on the move

Religious leadership
This game piece got a big shove forward from multiple religious leaders in 2015. Pope Francis’s Encyclical on climate change received significant attention, and the Islamic Declaration on Global Climate Change also made a strong statement. Some analysis suggests that public opinion significantly has shifted as a result, but will that change the climate policy conversation? It does not seem to have influenced the climate stances of Catholic presidential candidates in the U.S., and we know that concern over climate change doesn’t necessarily translate into making it a voting priority. But 2016 could be a big year for this chess piece.

Business advocacy
One business-engagement promotional piece, pushing for carbon pricing and a clear policy outcome at COP21, claimed to speak for 6 million companies. Even putting that aside, big business has been much more vocal during 2015 in calling for action on climate change, carbon pricing and broad climate policy. What’s not clear is the depth of this support.

More companies are certainly on board, but a recent report analyzing corporate actions (as opposed to announcements) concluded that half the world’s blue-chip companies are obstructing climate policy rather than the opposite. So while the business advocacy chess piece did move in 2015, we’ll have to see what happens after the lights go out at COP21.

Brand pressure
Can customers significantly influence company actions on climate change?  In principle, yes — but there has been little evidence of many such impacts. That changed in 2015 when press reports criticized Edelman Public Relations, one of the largest PR firms in the world, for promoting coal despite committing to climate change goals. After reportedly losing executives and clients in the aftermath of this criticism, Edelman announced it no longer will work with the coal industry or climate change deniers. This could signal that brand pressure will become a more active chess piece in 2016.

Alarming climate numbers
Hope springs eternal that evidence of climate change will trigger a “do something!” backlash in the U.S. This year saw almost every global temperature record and many local records broken. It’s not at all clear that this will elicit much public alarm or calls for action. There’s actually a double-edged sword in play here. As people become more accustomed to extreme events attributed to climate change, they could just as easily respond with a metaphorical yawn as with a “do something!” message to policy makers. That could make it harder for many other chess pieces to move forward.

Carbon pricing
This chess piece received a lot more attention in 2015, but is it really moving? Everyone seems to be calling for a carbon price, but we don’t hear much about what the dollar value would be or how it would be implemented. Carbon prices in use today around the world are basically too low to have much of an impact on energy decision-making. Proposals to shift the international climate negotiations toward adopting a common carbon price, as opposed to a common carbon cap, never received traction. The carbon pricing chess piece has become politically correct, but we’ll have to see in 2016 whether it has legs.

New science
We have seen many climate sciences stories during 2015, often covering trends or implications of climate change that aren’t yet part of the consensus science view. We read about accelerating glacier movement in Greenland, tipping points in the long-term prognosis for key Antarctic glaciers, and global fires potentially invalidating climate modeling by cancelling out forest carbon sinks.

We read about the possibility that we’re on the verge of a significant warming acceleration as oceans release heat they’ve been storing, analysis of possible accelerated methane emissions in the Arctic, and suggestions that the climate is more sensitive to greenhouse gas concentrations than generally assumed. If this pattern continues, and if this information can be effectively communicated to the public, it could become an important chess piece.

Fossil fuel divestment
We saw an increase in 2015 in calls for fossil fuel divestment and discussion of stranded asset risk facing investors. A recent Blackrock Investments report (PDF download), however, concludes that there is no indication that today’s stock prices reflect potential climate risks. If that is true and remains the case, this chess piece will stay stuck in terms of importance. But it could move forward quickly under the right circumstances, taking this chess piece from largely rhetorical to business-material in 2016.

Climate risk disclosure
Companies face growing pressure to disclose climate risk. The year saw a huge story break in the form of memos documenting Exxon’s internal acceptance of climate change for more than two decades, even while actively working against climate policy. Exxon’s memos have reignited discussion of climate risk disclosure, and the state of New York is investigating whether the company misled the public and shareholders. But there is enough uncertainty around projections of both climate science and climate policy that it always will be difficult to prove that a company acted culpably in disclosing climate risk.

National commitments
Countries voluntarily have brought national commitments to the table going into the COP21 meetings in Paris. This has generated considerable excitement. But voluntary commitments extending decades into the future — with no legally binding framework to keep the commitments on track — are tricky to characterize as solid forward movement on the Climate Chess game board. We’ll have to watch carefully how countries follow up in 2016.

We see signs of forward movement on the chessboard; we also see backward movement or no movement at all (a continuing failure to move the Climate Communications chess piece). We’ll have to wait until 2016 to see whether 2015 signaled a shift in the momentum of the game.

Interested stakeholders would play better Climate Chess if they recognized it for the serious team strategy sport that it is. Some do. As one electric utility executive commented to me recently, “If the other side knew what they were doing, we’d be in a lot more trouble!”

TheBrain company, developer of the TheBrain® software used to build the Climate Web, hosted a free webinar to demonstrate the the Climate Web. The recording is available here.

The Climate Web™: A Key Tool for Global Solution Networks

COVID-19: The Weakness of Traditional Risk Management Strategies
May 4, 2020
What Does COVID-19 Tell Us About Global Business Risk Forecasting?
April 27, 2020
The Business Response to COVID-19: #Pandemicwishing?
April 5, 2020

Get Insights on Climate Change Sent Straight to Your Inbox!